When I look at the many photos I’ve taken in Hawaii, nostalgic is a mild word for what I feel. Longing is more like it. It’s not that Hawaii is “paradise” as so many people say; it’s not paradise. Every morning when I got out of bed, I shook out my slippers to make sure no centipedes were lurking. And if I got up in the night for the bathroom, wariness was always in order for the same reason. And I’m talking about loooooong centipedes, as much as six to eight inches long. My sister Jeanne taught me to pick them up with long tongs, cut them in half (over the toilet) with scissors, and flush them down. That’s not exactly paradise.

But I felt at home there in a way I feel at home in few places. The land, the wind, the wide stretches where I could see far felt like mine.

There were wild pigs in the brush and their tusks were enough to cause serious damage. Or more. My brother-in-law Robert’s friend, another Robert, would come down to the land from time to time and go hunting just to clear them out some. There were cattle loose on the land. Driving back to the house at night was always a challenge as the cattle slept on the road – a warmer spot than rocks.

Ah, but the mornings. The photo is the view out my window where I sat each morning, writing. Rainbows didn’t always greet me in the morning, they were more an afternoon or evening thing, but when I see this photo, I remember ocean sounds and gargley myna bird conversations. The birds woke early, before dawn. And after I moved down near Volcano, I’d hear the jungle wake every morning, a cacophony of birds warming up for the day’s concert.

But this view is from my sister’s house, looking west to the ocean. And when I see it, I am home. 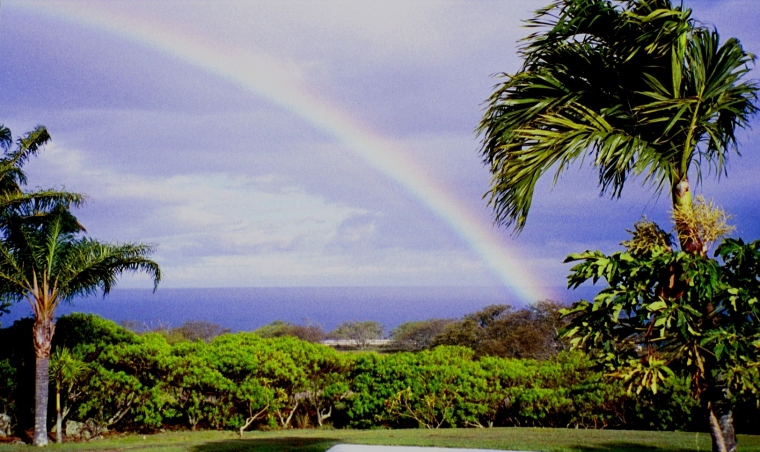