After more than a full year of Big Projects layered onto Big Project, I woke the last two mornings with my head empty,

“I thought your head was always empty,” younger son said via phone which made it safe to say.

Addle-headed is not the same as empty-headed.

I had no trip to organize (we’d had three over the past year), no pressing detail work, no painting or fixing, no editing or marketing. No renovations. All of which required Big Projects over the past year, usually more than one at a time.

The last two Big Projects are in: final galley edits on the poetry book went in Friday with all the dots, tiddles, M-dashes, misspelled words and commas marked and corrected. On Monday, taxes followed the trail to the post office, complete with K Schedule and A Schedule and forms with various numbers – several beginning with 88-somethings, and a second packet with the Missouri taxes and its several pages.

Both projects filled themselves with a multitude of numbers and fine details and checking and rechecking which filled my head the first thing upon waking. Big Projects, of whatever kind, do that.

What’s a girl to do with no Big Projects? With time on her hands and an empty head?

I’ve never been a big television watcher. A farm childhood and years of international living and travel took care of that piece of American culture. I missed most of the 80s decade all together. Actually, I missed a lot of the 70s too. What I remember from the 1980s is living in New Orleans, New York, St. Lucia, Mexico, and Washington D.C. – where I owned a television for the first time in years. The same television now lives in our bedroom.

It’s too cold and rainy to walk although my body could certainly use a long walk. A recent bout with amnesia and high blood pressure (fancy that!) precludes work with weights above my head. Yoga requires too many head down poses to spend much time with that.

So I stare out the window at a muddy yard, remember last summer’s drought. The oak has stubbornly refused to leaf out. It obviously knew something the rest of us only guessed at. Its time is not the calendar’s time. Its time is its own.

Time, that most elusive and unknowable task-master, stretching.

My friend Teresa has a blog called CRAZIE TOWN. She writes funny stories about her family. Lately, she’s also been writing about cleaning out her office. Mostly, she writes funny stories. I never write funny but I’d like to. So Theresa, you’ve prodded me. Here’s MY cleaning office story. I’d also like to steal her title and use it for my life right now, but she already has it. So I could say crazy family or crazy house or Just Crazy, which, given my life over the past month or two, seems the most appropriate.It began in the spring with Youngest Son talking about the necessity of leaving San Diego when his son, my grandson, is deployed to Japan. My daughter-in-law is working away from home right now and Youngest Son neither likes living alone nor does he like what it costs to live alone in San Diego. Could he come here if he needed to, he asked. Sure, we said. No problem.

And like a log jam caught in spring’s thawing river ice, “Sure” got things moving. Tumbling, one could even say.

We also had to clean out the garage so the items moved from San Diego could be stored in said garage until we completed all the rest of the shifting. I made an appointment with the city for Bulky Item pickup. That was good. We needed to toss some stuff. So we cleaned and tossed and made a pile of expendable things inside the backyard gate.

Then Two Sons returned and offloaded all the stuff they brought back from San Diego into the cleaned garage and spent the night and left the next day for Florida because Youngest Son has stored household items from his move before moving to San Diego. Now we have boxes and bins and a motorcycle. And a very small garage.

So while Two Sons were gone, Husband and I cleaned more. And since the Writing Office was empty of sofa and since we hadn’t filled it back up, it seemed a perfect time to do some painting. We began with a base coat.

Notice the small rectangular shadowed spot at the bottom corner of the window. That’s a faceplate for a plug. I took said faceplate off so I could paint around it. Simple, right? A bee flew out. Okay…. That set off a flurry of activity. We shooed the bee out an opened window and put the faceplate back on and looked out the window you see here and a swarm of bees were lining up at the edge of the roof below the gutter as if it were a runway. It was. We had a wall full of bees. We could hear them if we lay an ear to the plaster wall. We hadn’t before but then who listens to a wall?

At about that time, the Two Sons returned from Florida with more stuff and with moving and layering and a big trailer and all that, we finally got around to finding a bee removal company on Monday. They came. Yes, we had a wall of bees. But they were booked (seems June is big bee time in Kansas City). They could come on Thursday. Early? Can you come early? we asked. We were leaving to fly to grandson’s wedding in San Diego on Thursday. Ah, yes, that’s an added piece of adventure. Husband and I were presiding at said wedding and since it was Younger Son’s son, well, we were all going. A friend, bless friends, came to babysit the house and the bee removers and the bees until they were finished so we could leave. For the airport. (And if you are really really interested, we have a zip file of photos the bee removers took of the process — they removed the interior wall, the bees, and about 60 pounds of honey.)

We left the house in chaos and came back to chaos (the weekend in San Diego wonderful, the wedding wonderful, and if you’re interested there are photos on my Facebook page). All the books, the ones we didn’t toss, are congregated on one wall of what is no longer the Big Office but Younger Son’s bedroom and all the file cabinets which have been cleaned and purged are stacked along the wall with the pieces of a desk, and I can’t find anything.

And we have a room that has no wall against which nothing is stacked. I’d prefer a desk with computer. But not. 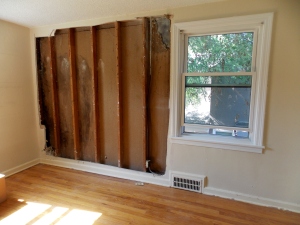 But no bees. Or honey. No sons either.

Two Sons went to Las Vegas with their dad, smart men, for a vacation. They will be back in a few days and in the meantime, we are resting. What more can we do? Except I can’t find the recently purchased bag of epsom salts to soak my resting body. As I said, I can’t find anything.

Younger son is a builder and Elder Son is an electrician so he will run wiring along the bottom edge of the studs so I can have another outlet (sans bees we hope) and Younger Son will put up sheet rock and paint and so mostly right now Husband and I are resting and searching for things. You don’t even want to see all the stuff stacked in our bedroom. I’ll spare you that shot.

We dragged all the unnecessary items stacked against the backyard gate out to curbside and Bulky Item Pickup picked up today. That’s done. And since I don’t have anything else to do, I mean how much resting can you do?? this seemed the perfect time to re-finish the old desk for the Writing Office. Might as well. It’s already on the back porch.

So while we wait, I’ll just be crazy. Might as well. It passes the time. .