A blogging friend, Rambling Rose, asked me to write a post on our debilitating winter storm. She wrote, “We in the tropics only hear about such weather on news channels.” Ah, to be so fortunate. Although I have lived in the tropics from time to time, I do not now. Now I live in the middle of the Continental United States which is prone to storms of magnitude and ferocity. This is what two days of a winter storm of magnitude and ferocity looks like.

It began on a Friday night. And actually, was quite beautiful. The forecast had said it would begin with light rain turning to ice. It did. The shiny streaks are the ice crystals, picking up light as they fall.

We brought in stacks of firewood and lighted a fire. Watched television, especially the weather channel, looked outside from time to time. The ice crystals finally turned to snowflakes but there was no wind so we went to bed.

We slept soundly under our feather comfort, sort of like Mr. and Mrs. Claus at the North Pole after the Christmas Eve run. We did hear a thump in the night and got up to see what it was. Between snow and dark, we couldn’t tell but the thump seemed to come from upstairs. Not a good sound. The last time we heard a thump in the house signaled a complete attic to basement rewire. The next morning was still and silent. It had snowed all night. No wind. Just snow and snow and snow.

In early light, at my upstairs window where I sit each morning, 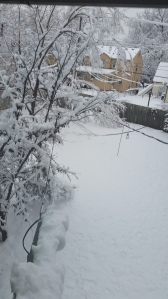 I discovered the thump. If you look at the bottom left corner, you will see a lump of snow sort of lying on something. That something turned out to be our window sill, pulled loose by the weight of the snow.

It kept lightly snowing. Two guys came by and offered to shovel our sidewalk for ten dollars. We said okay. Only the front bushes were so heavy with snow, they bowed over the sidewalk making any walking passage or shoveling impossible. So the guys shoveled a bit along the driveway and the front piece of sidewalk. As if that would make any difference.

The sky stayed cloudy and the snow stopped. So did the cable television and the electricity. We built another fire and turned on the gas stove to warm up the place. But first we had to remember how to light said stove since it has electric sparks that catch the gas. Ah, yes. Use a striker. It worked. We did not, however turn on the oven as we couldn’t figure out a way to do that without exploding the place.

But being a farmer’s daughter, I put pots of water on the stove top burners and kept them steaming. It helped a little. We managed to feed ourselves although I can’t remember what we ate. No doubt something simple. Cliff kept putting logs on the fire. I stayed wrapped in a blanket and slept in my clothes that night because I couldn’t face getting undressed. 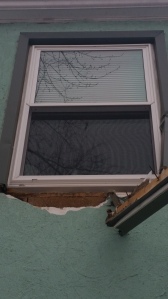 This was the thump in the night. Snow had pulled wires loose and along with the wire, the window sill and the window covering around it. You can see in a previous photo how the willow was bending over wires from the weight of snow. Why anyone would attach a cable to a vinyl window covering is beyond me, but they had. And the weight of 12″ of snow on our graceful and beautiful willow had weighted them down. With the wires.

At some point Sunday mid-morning. electricity came back on and the furnace and the hot water. We, husband, son, and mom, took showers and went to a neighborhood diner for breakfast.

Monday, I began the task of calling insurance company and contractors. We’d also developed a leak in the upstairs ceiling, so son and I climbed into attic, spread out some big garbage bags and stationed pots and buckets under the leak.

The following days/weeks passed in a blur. An insurance adjuster called, said he’d be in the next day and would call to set up an appointment, but as he was in Wisconsin and a big storm passed through there after here, I don’t know if he came…or was perhaps sent out somewhere else. Many people had a lot more damage than we did. I called the cable folk and asked someone to come out and reattach the cable; called the electric folk and they put a “temporary” (whatever that means) re-connection to the electrical wires. Called the electric installers and they came out and gave an estimate for repairs.

You may remember the rambling post I made about having our entire house rewired. Well. One of the things pulled loose and damaged was the new tubing and weather cap around the new KCPL wire running into the new KCPL box. And if the weather cap leaked, the water could not only short out the KCPL box, but also the new panel in the basement. My son who knows these things, once being an electrician, went out and saran-wrapped the weather head back on the pipe, thus sealing the house against another catastrophe with wiring.  The company who installed the electricity gave me a $1500 estimate for full repairs and re-connection.

I have yet to see an adjuster. The insurance company calls from time to time, but there’s been so much damage to so many houses, not just in Kansas City, but across most of the Midwest, and especially after this latest storm which largely left us untouched, that I expect we may boggle along this way until spring.

The cable person re-attached the downed cable to a spot above the window, hopefully he found a stud, there must be sturdy studs in 1924 built houses, and maybe especially in 1924 built houses, and my son leaned out the top window with his trusty wire cutters and released the mesh wires (mesh wire holds the stucco in place) attached to said window ledge, so it dropped to the ground and is no longer banging against the house. And we, meaning my son using the chain saw and Cliff and me trundling cut up branches to the front curb, severely trimmed the damaged willow much to my sadness. I planted that willow as a baby 9 feet tall, and it now reaches some 35 or so feet. The bees love it in the spring when it buds. I will give it generous food stakes once the weather turns warm. One of my monarch butterfly bushes is damaged and another, in a trellis, is leaning on its side.

It’s Imbolc, the festival of light, midway between winter solstice and spring equinox. The sun returns (yes, Rose, I know you don’t see that rising and falling sun much where you live) and the groundhog, oddly enough, didn’t see its shadow this year. We pray for an early spring.

Light a few candles. It’s not been an easy winter for many. Rejoice in the light.