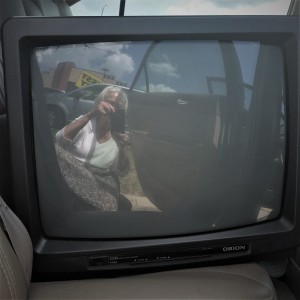 I said goodbye to an old friend, today. A loyal friend for nearly thirty years, through moves and changes and chaos. Old Friend has just kept being there for me and kept working. This is its story.

In 1990, after three years of living in Mexico, I returned to the United States and moved to Washington D.C. My son, Stephen, was living there, too, which made the move easier.

After renting a studio apartment off DuPont Circle, I retrieved my life in storage and set up a home. While I had a lot of books, I did not have a bookcase, so Stephen, being a tool man, build a sturdy one, 3 1/2′ x 6′, with copious room for my copious books, and with a gap in the middle of about 20″, which he filled with the Orion television for my birthday.

When I moved to Santa Fe three years later, I moved both television and bookcase and set up housekeeping in a 600 sq. foot adobe in Seton Village outside the city. Miraculously, the bookcase fit between the front door and the steps down to the kitchen. I stayed in Santa Fe for five years. A record from my usual three years here and then move pattern.

After Santa Fe, I came to Kansas City, Cliff and I bought a house, and the Orion went on the same bookshelf in the large bedroom which also serves as my workout room. A year later, Stephen moved here. By that time, we’d dispensed with the rabbit ears, hooked up cable, and attached a video player for the years of saved workout videos I own…which, as a matter of convenience, are also stored on the bookcase. We have, in fact, years of movie and workout videos. A VCR, even in this day and age, is valuable.

And now we come to this summer’s birthday. I came home from some errand or another and went to the bedroom to change clothes, only to discover a new 19″ flat screen sitting where the old Orion used to sit. Stephen had once more bought a television for my birthday. The new flat screen came with a new remote, which I also had to learn, but that’s another story.

It has taken a month for me to release the old television, however. It sat in my writing room, until today, we finally carried it to Best Buy for recycling.

You see, that Orion held stories–Stephen and me watching t.v. as we ate a meal together at my little studio apartment in D.C.; watching “Nothing Sacred” with Cliff in the adobe, a favorite television show, alas no longer with us, either, as we snatched a quick dinner before evening services. Me sitting in front of the television one year, crocheting stars for Christmas ornaments, fire in the fireplace, which ornaments I sent out to family and to my best friend, Cynthia, who is no longer with us. The Orion was part of that history.

We moved the Orion out to the back seat of the car. I kept trying to give it away; although it still worked, no one wanted it. I could not just trash it.

And so my dear husband, who understands my connection to memories, said, “Why don’t you take a picture? Then you can keep it.”

So we drove to Best Buy, turned the Orion to face me, and I took our picture. Together, one last time.