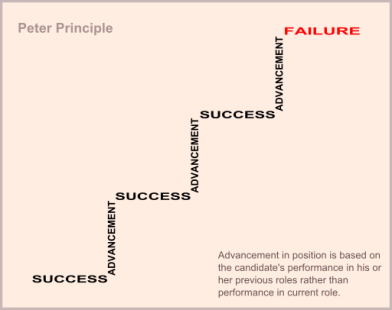 The Peter principle is a concept in management theory formulated by Laurence J. Peter and published in 1969. It states that the selection of a candidate for a position is based on the candidate’s performance in their current role, rather than on abilities relevant to the intended role. Thus, employees only stop being promoted once they can no longer perform effectively, and “managers rise to the level of their incompetence”. Text and illustration from Wikimedia.

An email arrived in my inbox yesterday, advising me of updates to WordPress that MUST be made and if said receiver of email hadn’t done so yet, click on this link.

That was the first step on the above stairway to chaos. I successfully deleted said email because I don’t click on ANY links in email and especially from people I don’t know.

But then, I went to WordPress and had a long chat, meaning a chat via text not voice, with an accommodating tech who said, “Hmmmm. That’s curious…” and proceeded to put me on hold while he checked it out. Didn’t come from WordPress, he came back to write. Just delete it as spam. But your email address is visible to anyone and perhaps I should buy Privacy. But my email address isn’t on my site, I said, and he went on to explain how some site or another has all these addresses listed, but I could buy Privacy from, oh, I don’t remember the name, something like BOTARMY (probably not but all in caps, but whoever processes my payment to Bluehost for hosting my site name) and said I could buy Privacy for my account there.

Now. Mind you, I’ve been on some kind of computerized communication since the late 1980s, let’s say more or less 1987, when I bought my beloved Smith Corona Portable Word Processor on some rare trip to the states and lugged it back through suspicious Mexican customs to sit on a desk, in front of a window, in my apartment in the Zona Rosa in Mexico City, only to lug it back to Washington D.C. in 1989, to lug it to Hawaii in 1992, to lug it to Georgia in 1993, to take it to Santa Fe in 1994, where I bought my first HP computer in 1995 and signed up for email. The Smith Corona and its disks went into an overhead storage shelf in my little 600 square foot adobe in Santa Fe. I have become fairly adept at electronic communication in the meantime.

That’s probably more than you want to know and this is likely to become a really long post.

So anyway, I’ve been on a real computer with Windows and email and all that stuff since 1995 and I advanced up the stairway rather successfully. I do, in fact, have stored files from those first disks and even a machine to plug into current PC and read said disks. Maybe I had floppies, but I can’t remember and I don’t have any saved so maybe I didn’t. I do, however, have saved disks from the Smith Corona, and if anyone knows how to read said small disks, and I’ve looked, mercy, I’ve looked, let me know.

Anyway, back to yesterday. So. WordPress guy said contact my site name provider, in short. And I did, and had a realllllly long chat with said provider who used to host my website but now doesn’t but has to host my name because WordPress doesn’t have that ability yet…although I wish they would get it as it would simplify my life. At least it would have yesterday.

So at any rate, I advanced to the next step after very long chat, and since I rarely go to Bluehost except to re-sign up again to host my name (isn’t my name MINE???), I’d forgotten how to get there and what to do once I did. The chat person was patient. It was a long chat of me going back and forth trying to make sense of what I couldn’t do. Fortunately (although it didn’t feel fortunate at the time), I lost the connection to chat person and couldn’t retrieve it. But it went something like this:

5:08:35 PM Janet Sunderland I can get in and I can update information, but I can’t get to anything. It says the account was ended in 2012.

Anyway, this went on for a very long time before the chat dropped (and possibly, Anujina was really tired of answering my inane questions and stopped). However, I had managed to go in, change the password and log in name, signed up with Privacy (it’s a one click deal wouldn’t you know) and, oh, yes, updated the credit card info.

But I called anyway and spoke to a very kind and patient tech who walked me through what I’d done, set me up for automatic renewal, and reminded me how to get around on the BlueHost site.

And then I got off the phone, noted all information the the passcode book, and took a nap.

I have risen to the level of incompetence with computers, that much is obvious.

But I shall persevere. I mean, what am I going to do if I don’t? My history, if not in the stacks of journals I lug from place to place, is in computer files.

Whine. I guess I can whine. Not particularly charming or effective, but you have now, if you’ve reached this point, read the whine and possibly even absolved me. Maybe you’ve even laughed.

17 thoughts on “The Peter Principle–Reached”