In my American Heritage Dictionary, abundance is defined as 1. A great quantity; plentiful amount. 2. Fullness to overflowing. 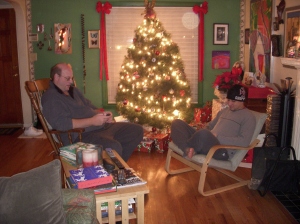 In October of this year, one evening we were stitting at dinner and talking about Christmas and what we could or would or wanted to do. I wanted us to go to Florida to see second son and his son who would be traveling to Florida for the holiday. Oldest son lives with us, so the three of us were trying to figure out how we could drive to Florida – quickly – given all our other demands at Christmas time – and see the sons we hadn’t seen for over a year. We couldn’t.

“I want all my sons home for Christmas some year!” I said in frustration and disappointment.

It has oft been said, “Be careful what you wish for.” We pray and we plead with God and we ask for what we want without really thinking through our requests. It’s also oft said that God has a sense of humor. This was one of those times.

Sometime in November, younger son called and said my daughter-in-law had to be out of town working over Christmas and he didn’t want to spend Christmas alone. “I’ll talk to Michael. He’ll come too,” he said, referring to his son, our grandson. “Is that okay?”

Of course it was okay! Why wouldn’t it be okay?

And so the planning began. Youngest son would fly up and bring a bag full of tools in case we wanted something fixed. Okay. Michael would drive in from California. Okay.

And then things became abundant. Youngest son decided to come on the 15th; Michael was arriving on the 17th; we had a big party here at the house on the 19th…… okay….. “Oh, and is it okay if I bring my dog?” Michael asked. Okay. The dog a pitbull named Mittens. …..okay…..

We turned my writing room into the guest room for youngest son; we created a bedroom in the office for grandson; and Mittens sort of adopted all of us. We were the grandparents….. okay…   Oldest son has his quarters in the basement so mostly that worked the way it always worked and often all three would be down there playing computer games and watching television. And the table at every meal was abundant. Four alpha males at a table filled with food, and me. Oh, and the dog who always snuck food from Gramps’ hand because that’s what Gramps does with dogs who adopt him.

And the THE PROJECT began: a decision to surprise Cliff with a new bathroom bloomed, the bathroom between the guest/writing room and the office. The entire week before Christmas – and after the party – we went to Home Depot on a regular basis. We bought paint and plaster and sanders and cleaners and a light fixture and – oh, yes, two trips to find the right medicine cabinet, and of course I became an integral part of all these trips. And we cooked and made pot roast and beef stew and steaks and in there somewhere, I  made several batches of cookies because of course all my sons were home. And then the bathroom was done and it was beautiful.

And then it was Christmas and it was beautiful. And that night, Cliff and I both got sick: Cliff with a stomach virus and me with bronchitis. Mid-week we switched. In the meantime, sons came down with various levels and intensities of same. We were a houseful of sick people. And then we all got better and then it was New Year’s Eve… and grandson’s girlfriend flew in from California to spend a few days and meet his family. And then we stayed up late at night playing board games and poker and drinking wine.

And will I remember to be careful what I ask for? Will I carefully think things through? Probably not. But I will remember that my life, itself, is abundant. And I don’t need to add much more.