Cliff and I went up to the farm this last week. It’s the family farm, an original homestead. Many of the outbuildings are gone and the fields planted to tallgrass prairie. We keep a camper up there and there’s a building we call the Little House, an addition Dad built on in the mid-1970s after we tore down the old house, a simple farmhouse which dated from the early part of the last century, and Dad bought a double wide mobile home for Mom to have a new house. The Little House is built from the remnants of the old house. A sturdy Ralph Brucker build construction about 15′ by 25′ with a basement and used when more of the family came home than the three bedroom mobile home could handle. I sit at a put-together Wal Mart desk in the Little House and write. We live in the camper – our Hobbit Hole.

At any rate, we go up each spring and clean out critters from the camper and the Little House. Last year, when I first unlocked the side door to the Little House, a long snake-skin greeted me and I jumped – until I saw that the skin was just that – a left-behind skin some bull snake shedded along the rough edges of the steps. We didn’t know what to expect this year since the winter was exceptionally bad with drifts reaching fifteen feet in some places and lots of spring rain. Anything could have happened. But it didn’t – except for a few skims of water in the basement and a few dead mice. The camper fared better with only dead bugs and dust. That was our first blessing of the trip.

We’d also gone up to do the “cemetery run” as I call it. We have family buried in four of the small country graveyards scattered around Marshall County and one up in Barneston, Nebraska, where my mom and step-dad Ralph are buried and his family. The farm sits right on the Kansas/Nebraska state line so going from one state to another is common.

Each year when I was growing up, Mom fretted most of May about the peonies and whether they’d be blooming in time for Memorial Day. This year, not only were they blooming, they were splendid and filled the farmyards we passed and the cemetaries.

We first visited Barnes, Kansas, a town I lived in when I was in grade school. My father and older brother are buried here. Barnes is one of those sorts of never-never lands with childhood memories cloaked in shadows. My older brother died before I was born and my father when I was eight. We left Barnes for the farm when Mom and Dad married.

All of the cemeteries in that part of the country are old – most have headstones dating back to the early 1800s. You can see some of them in this photo – they lean. But they stay. And the old parts have fewer flowers planted.

Barnes is one of those prairie towns that’s making a comeback. The bank is back in business, a small one-room brick building. My father’s old storefront where he sold electrical supplies still stands. Now there are two cafes in town – a farmer’s cafe where Nannigah’s Grocery used to be and a larger bakery and cafe that caters to travelers and tourists and sends bread out to all corners of Marshall County, and the center of much of the business in town. There’s a prairie gift shop across the street. It’s funny to think of Barnes, population about 400, as a tourist destination – there’s also two B&Bs. 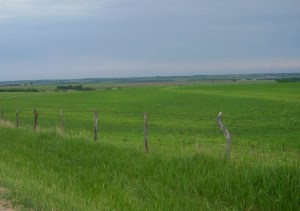 Returning to the prairie always puts me in a pensive mood. So much space. yet at the same time, so familiar as if from another dream space of life or another century. Not much changes. The hedgeposts, used because hedge is a tough hardwood that resists rot, look the same as they’ve looked forever in my memory. And the layers of rolling hills behind other rolling flatlands under a sky that goes on forever, lends itself to either boredom or pensive. I’ve never been bored in this landscape and have often called myself the “see-far woman.” Most of the places I’ve chosen to live have allowed my eyes to stretch. When my eyes stretch, my memories follow.

I don’t know any other way of knowing who I am. I’d pulled my hair back and secured it with side combs and when I looked in the mirror, I saw my Grandma Sunderland. She is buried in the cemetery outside Vermillion along with several of her children and her parents. Her family name was Law, and after wandering across this cemetery, we finally found the headstone of her parents. I know a little about the Laws, but not much.

My older cousin, Twyla, can tell me stories because she remembers both Great-grandmother Law and Great-grandmother Sunderland. Both names very English. Both families immigrating into Kansas in the mid-to-late 1800s. As did my step-dad’s Brucker family. Not English. And very proud of their Bohemia roots. Generations and generations of families and family stories.

Along the way, we also stopped in Frankfort, Kansas where my mother’s family is buried. Frankfort family reunions were with Grandma and Grandpa Moore, Mom’s grandparents, and all those collected siblings and cousins that overflowed the park in the summer gatherings. My mother’s name was Ellis and her parents are buried close to the Moores. Grandpa Moore was a paper hanger and Grandma Moore had the most beautiful white hair of which she was very proud. But her’s was wavy, as was my mother’s, and mine is straight, like the Sunderlands.

My favorite Grandma Moore story comes from when I was about six. We’d driven from Barnes to Frankfort for a family visit. At that time, the great-grandparents lived in a long, floor-through apartment on the second floor of a large brick building – a building still standing today.  After we’d climbed the very steep stairs to greet them, Mother suddenly said she’d forgotten something in the car and ushered my older sister and me back downstairs. She opened the car door as a screen and then turned to us. “Don’t say anything about Grandma’s blue hair!” We didn’t. Prairie women, regardless of the family, are a pretty fierce lot. I’ve remembered that story countless times – often when my hairdresser suggests a blue shampoo to hide the yellowish tinges in my own white hair.

And then, after we returned to Kansas City and after our adopted daughter Julie and grandson Navarre visited overnight, we went to Topeka for an Ellis family reunion at my cousin Tom and Kathy’s house.

We sat around as we have always, with whichever family of my extended three-pronged history, and told stories. My cousin Connie was visiting from Italy where she has lived since the mid-70s. She looked like her mother, my aunt, who’d died ten years ago. We remembered when we last saw each other – in the year when I’d just returned from living in Germany and right before she moved to Italy. Her two children, now young people, have come to Topeka to live and go to college.

My ex-sister-in-law Jill was there with her mother. And her daughter Jacque who now also has a daughter

Josey who has a grandfather Jack, my brother, who was home from Hawaii.

And I marvel at how so much remains the same in a world gone awry.

And I think about who I am and how I have changed and yet, remain so much the same.

This is who I am.

And I wondered how people become who they are without that connection of family – a family for good or ill. Certainly my history is replete with suffering and sadness and changes and anger and all the things that make up this life. Some people, because of their history, choose to distance themselves from their families and create lives unattached to all that sadness or pain. I understand how important that might be. But I also wonder if the pain, regardless of how it’s distanced, remains. Have we become a culture addicted to things and success in order to fill the vacancies of history and family?

Or is my decision to come back to Kansas to remember and renew simply my part of the family story?